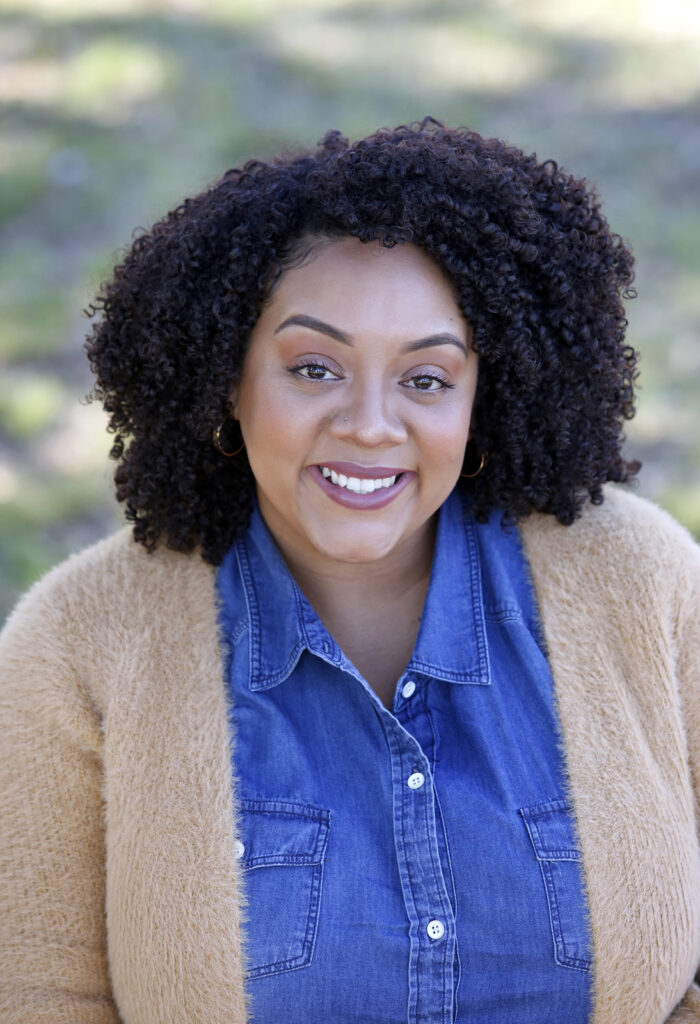 Tamika Sanders serves as the Manager of Development at Dallas Truth, Racial Healing and Transformation. She identifies as an Afrolatina — a Black woman — and uses the pronouns she/her/hers.

Having worked in the non-profit sector for over 20 years, Tamika has focused on making a positive impact in the lives of children and families, since her work as a Peacemaker at the Harlem Children’s Zone, Inc. in New York City. There, she was instrumental in the development and implementation of early childhood curriculum, as well as teaching Spanish to the students of the Harlem Gems, a Universal Pre-K program.

After moving to Dallas, Tamika served in various roles first at Mi Escuelita Preschools, Inc. and then at Lumin Education, where she worked for ten years prior to joining the team at Dallas TRHT.

During her time at Lumin Education, Tamika primarily focused on social work and advocacy, before transitioning into the Development department. In 2016, with the support of Dallas Area Interfaith, Tamika was part of the effort that led to the revision of the 20-year-old Housing Code in the City of Dallas, by arranging house meeting with community members and coaching them to speak about their unhealthy living conditions at Dallas City Hall. As a result of this work, the Dallas City Council approved many of the recommended revisions; strengthening its minimum standards for rental housing by requiring that landlords pursue proper bedbug fumigation and mold cleanup when asked, and by expanding inspections for more meaningful enforcement.

As Development Associate at Lumin, Tamika found joy and purpose in connecting with community partners, vendors, funders and volunteers, learning their stories of what drove them to commit their time and/or money to mission of the organization. Tamika planned, coordinated and implemented quarterly donor events such as Mingle with a Purpose, a sponsored happy hour where stakeholders could network with one another. Tamika also led the annual United Way Workplace Campaign, which set a record-breaking amount of employee contributions that exceeded the organization’s annual goal. She also generated thousands of dollars in inkind, helping the organization meet the federal match as required by the Office of Head Start.

Following a traumatic experience with a racist business owner, Tamika saw the need for her colleagues to engage in crucial conversations around race, micro-aggressions, and systemic disparities affecting people of color. She led the effort to create a monthly staff forum called Passport Thursday at one of Lumin’s sites in Bachman Lake. It was during these sessions that home-visiting staff of the Early Head Start program would deepen their understanding of working with people of different cultures and communities, and ultimately contributing to a more equitable approach to school readiness by learning about and discussing topics such as Implicit Bias, Acculturation, being "The Other", The Holocaust, the Impact of the Latino Vote, and Understanding the African Diaspora & AfroLatino/a culture. Tamika was later nominated as co-chair on the organization’s first Equity, Diversity and Inclusion Council and was able to scale the concept of Passport Thursday, by coordinating a series of organization-wide forums called “Lunch & Learn”.

In 2021, Tamika was part of the inaugural Black Women in Non-Profit Leadership cohort powered by Dallas TRHT, which was developed to support Black women who are recognized as top leaders within the non-profit sector. On a personal level, Tamika found herself in a healing space where she could release Imposter Syndrome and the tendency to code switch — challenging herself to always show up authentically and take up space, at a time when she needed it most. Being able to identify with the other women in the cohort was imperative for her, and easily became an aspect of wellness. On a professional level, Tamika gained mentors, coaches and expanded her network, allowing her access to great opportunities for growth, learning and unlearning. Since her participation in the cohort, she continues to connect with and uplift other Black women in the sector by checking in and offering support on their current initiatives. Her experience with the 2021 BWNPL cohort fueled Tamika’s desire to help scale the program, so that other Black Women in the non-profit sector can benefit from the program.

Today, Tamika is spearheading our Development department as the primary point of contact for all individual donors and will be the project manager for fundraising, special events and grant management. Her work and her passion for narrative change, along with her ability to build relationships will help to ensure that the important work of racial equity, racial healing and narrative change will continue for a safer, more equitable, anti-racist city where all can thrive.

As a native New Yorker from the Bronx, Tamika enjoys live theater, creating art, listening to podcasts, traveling, reading, and karaoke. She is also an active member of Public Works Dallas since its inception in 2017, where she performed in musical adaptations of The Temptest, a Winter’s Tale and As You Like It, at the Tony award-winning Dallas Theatre Center.

Tamika would love to hear from you! Connect with her on Instagram @HeyMsTamika or send her an email at: tamikas@dallastrht.org