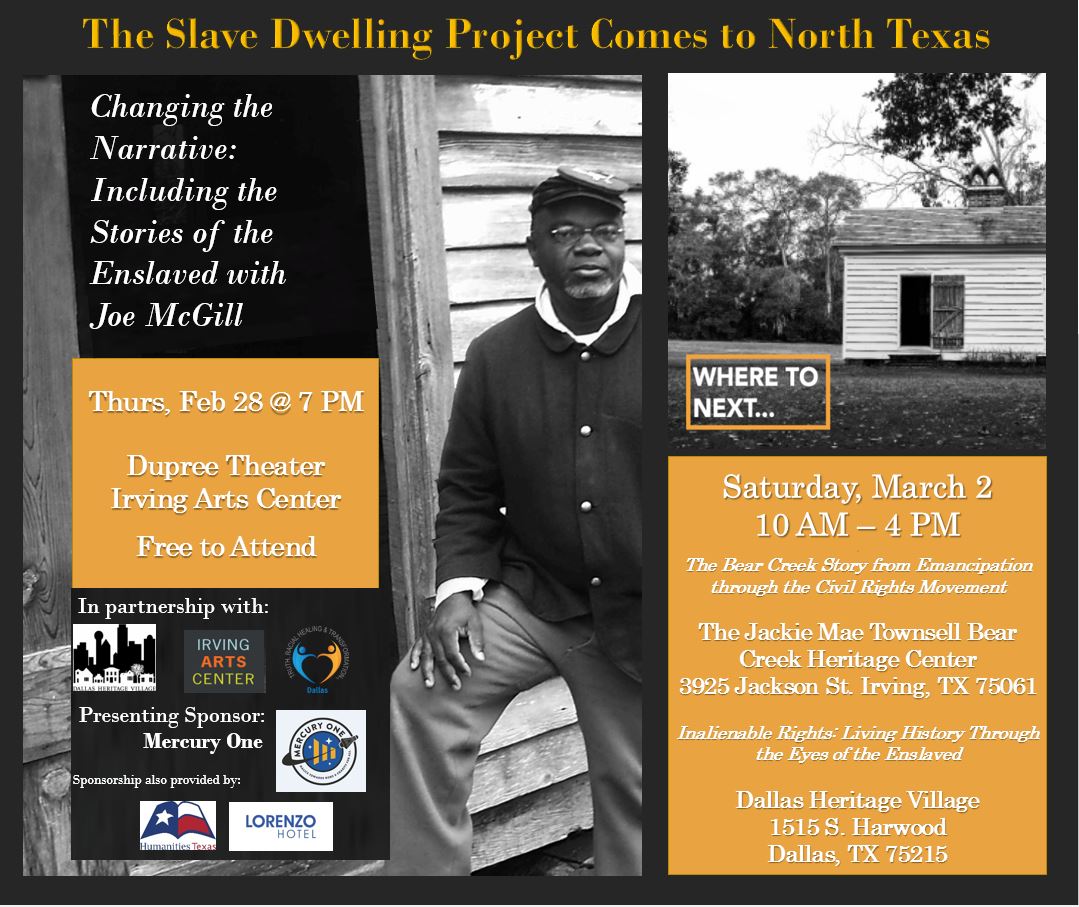 The Slave Dwelling Project is coming to North Texas for the first time, bringing forward the stories of the enslaved African Americans at Millermore, now located at Dallas Heritage Village, and the story of life after Emancipation in Bear Creek in Irving. There will be two public events in conjunction with this visit: a public lecture on February 28 at the Irving Arts Center and a full day of programming at both Dallas Heritage Village and the Jackie Townsell Bear Creek Heritage Center in Irving on March 2. This series of programs is presented by Mercury One. Additional support is provided by Humanities Texas and the Lorenzo Hotel.

Based in South Carolina, The Slave Dwelling Project’s mission is to identify and assist property owners, government agencies and organizations to preserve extant slave dwellings. This is done primarily through public programming, including sleeping overnight in these buildings.

“This trip to Dallas, Texas will be the 2nd to the state for the Slave Dwelling Project. In 2011, the second year of the project, I spent nights in slave cabins in Egypt and Seward, Texas. Slave dwellings can be found in many states throughout the United States, but Texas is the farthest west the Slave Dwelling Project has found and slept in extant slave dwellings.” says project founder Joseph McGill.

In 1966, the Dallas County Heritage Society was founded to preserve Millermore, the largest
remaining plantation home in Dallas County. In those first decades, the focus was on
architectural history and decorative arts. The Slave Dwelling Project is part of ongoing work
to reinterpret Millermore and include all of the people that lived and worked there,
throughout the house’s history.

“By working with Joe McGill, we are continuing the process of bringing forward the stories of
Arch, Charlotte, Clayton, Betsy, John, Lucy and their children. It will also be a spark for a
deeper conversation in our community about our shared, complicated past. Joe and his
colleagues have enormous experience in leading these difficult conversations throughout the
country, and we look forward to learning with them,” says President and Executive Director
Melissa Prycer.

During Saturday’s public event, a team of interpreters will address topics such as the daily life of an enslaved person and the critical need to preserve what is left of the structures associated with the enslavement of Africans and African-Americans. “The Slave Dwelling Project is proud to assist the Dallas Heritage Village in its effort to incorporate the
stories of the enslaved into their narrative,” adds Joseph McGill.

Part of the City of Irving’s museum system is the Jackie Townsell Bear Creek Heritage Center.
The Bear Creek community in west Irving is one of the oldest African-American communities
in Dallas County. During the late 1850s, a mix of free blacks, whites and their slaves began
settling along the upper reaches of Bear Creek. After emancipation, former slaves began
moving into the area, which developed into a rural African-American enclave during the era of
racial segregation.

By the early 1900s, nine African-American families owned land in Bear Creek. Director of Museums for Irving, Jennifer Landry explains: “Bear Creek is a hidden gem in
Irving’s and North Texas’ history and we are just beginning to expand our efforts to tell the
history of perseverance and the struggles that members of the community faced. We are
excited for the opportunity to partner with the Slave Dwelling Project and Dallas Heritage
Village to bring increased awareness about the importance of preserving African-American
history in North Texas.”

This partnership enables both organizations to tell a broader history of life in North Texas for African Americans. We are also partnering with the Dallas Truth, Racial Healing and
Transformation project to help keep the conversation going in our community. 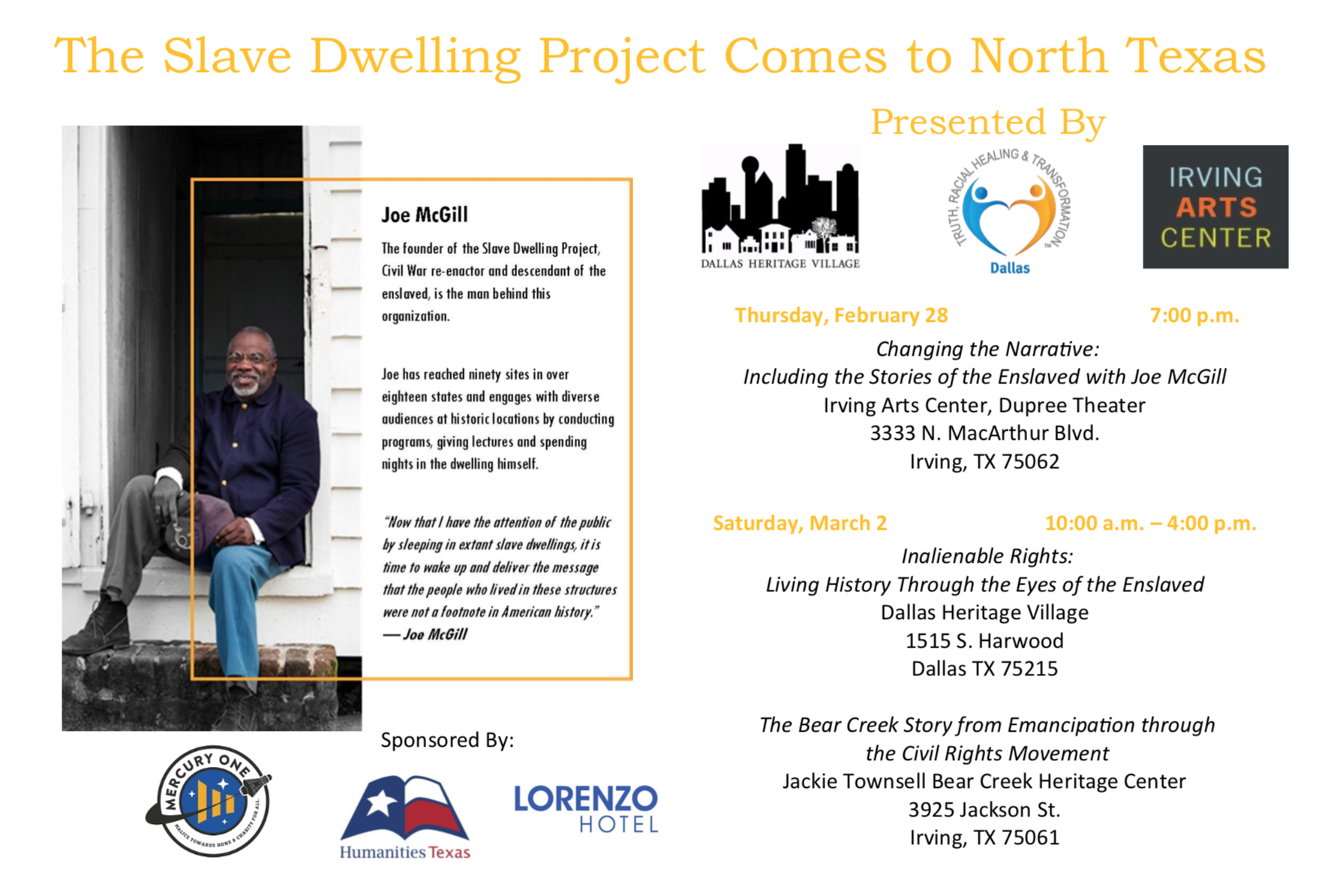 Friday, March 1
Camp Fire Conversations and Sleepover at Miller Log House and Gano House
Due to limited space, this will be an invitation only event. Please contact Melissa
Prycer at mprycer@dallasheritagevillage.org for more information.
Location: Dallas Heritage Village 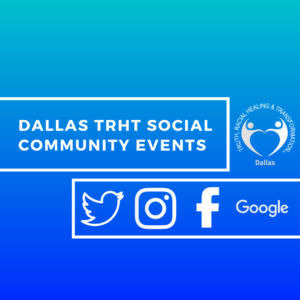 #DallasTRHT has spent time with the Community Foun

"Bodies and voices are the most powerful tools we

"Telling a story - for people like us - is a polit

This error message is only visible to WordPress admins


Error: API requests are being delayed for this account. New posts will not be retrieved.